There are a ton of blogs out there which talk about all the great things you can do in Universal Studios, and believe me, there is a ton to do. Most even have an article about Universal Studios with kids. Sadly, they all talk about bigger kids, say, 5-7 year olds. There is a general theme of “the park is really not good for Toddlers or little kids” that runs through most of what is out there. So, when I was going this last time with my husband’s extended family, and they wanted to go to Universal, I thought, is it even worth going with the little one? She is just shy of 36 inches and as such, most everything with a height restriction is out of the question. How much could this little lady do and would we have any fun at all? I’m gonna level with you, having read what was out there, I don’t think I would have gone had I not had a free ticket. Thankfully, I did and I went and I can tell you that Universal is a BLAST with a toddler. Sure, you can’t ride the hulk or Hogwarts, but you can and will have fun riding rides and experiencing the amazingly themed lands of Universal Studios and Island’s of Adventure. Here’s what my daughter did and LOVED. 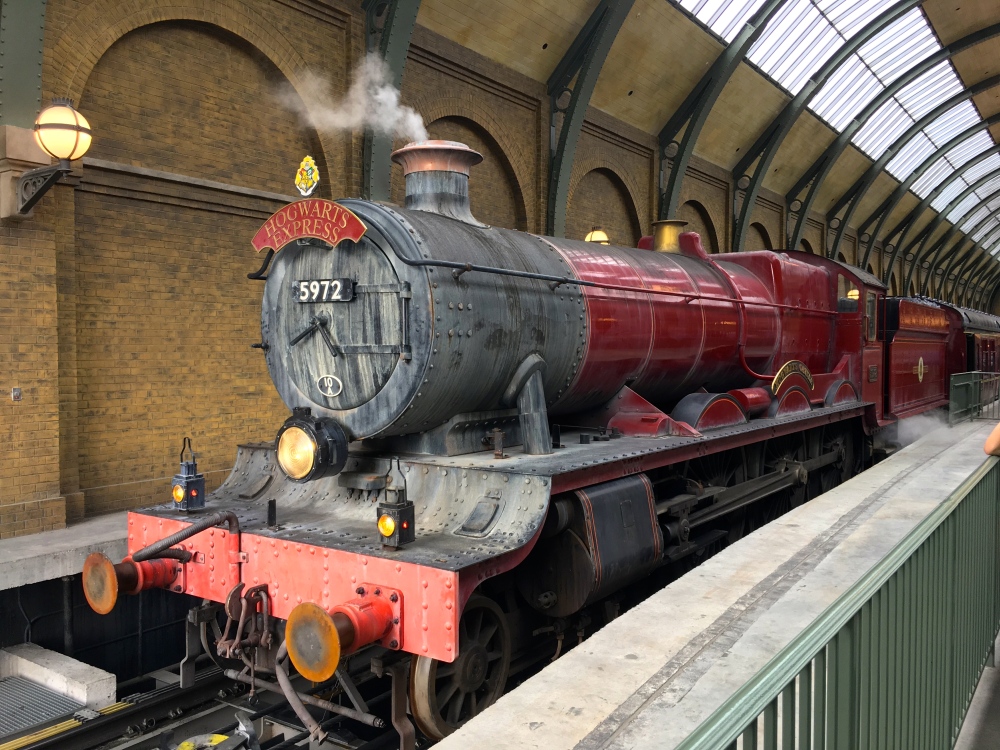 Hogwart’s Express
No joke, we rode this 6 times, 3 in each direction. She loved it! She followed along with the story and got scared at the appropriate times. She even pointed her wand at things. It was a blast. Most little kids love trains and this is the ultimate train ride. 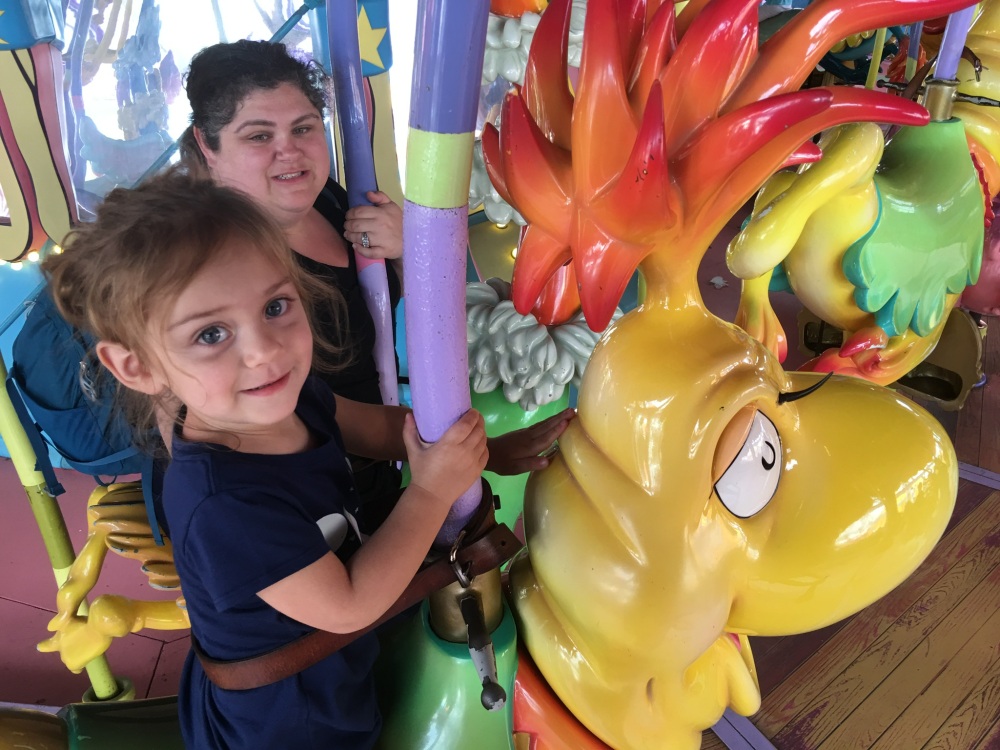 Caro-Seuss-el
The Dr. Seuss land as a whole was a big hit but I ahve to say this was the stand out, we rode this ride 3 times (or maybe 4, I lost track) She enjoyed it so much we had to force her to get off so we could get back in line and get on again. The characters you ride on are what you’d expect of a Dr. Seuss themed land with fantastical colors and shapes. So fun for the tiny tots.

Cat in the Hat
This was a hit even though we’ve never managed to make it through the whole story. I will say, it’s not as colorful as I expected and it does look a bit worse for wear, still, she loved it and we were grateful that she was tall enough to ride it.

All the Books You Can Read
Since our daughter is big on the books, there is no way we weren’t going to go in here. Actually, she decided we were going by running off into the store. Inside there were not only a ton of books, but a pail full of crayons and the Cat in the Hat was there too! We spent too much time in there coloring and reading and playing with the Cat in the Hat. She loved it. 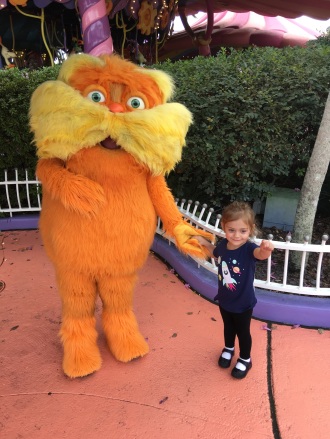 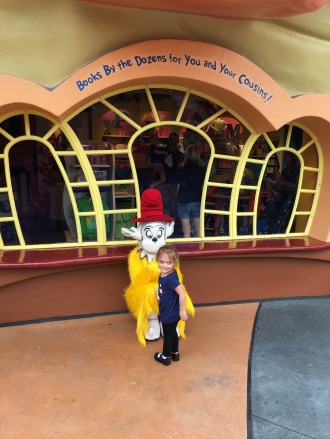 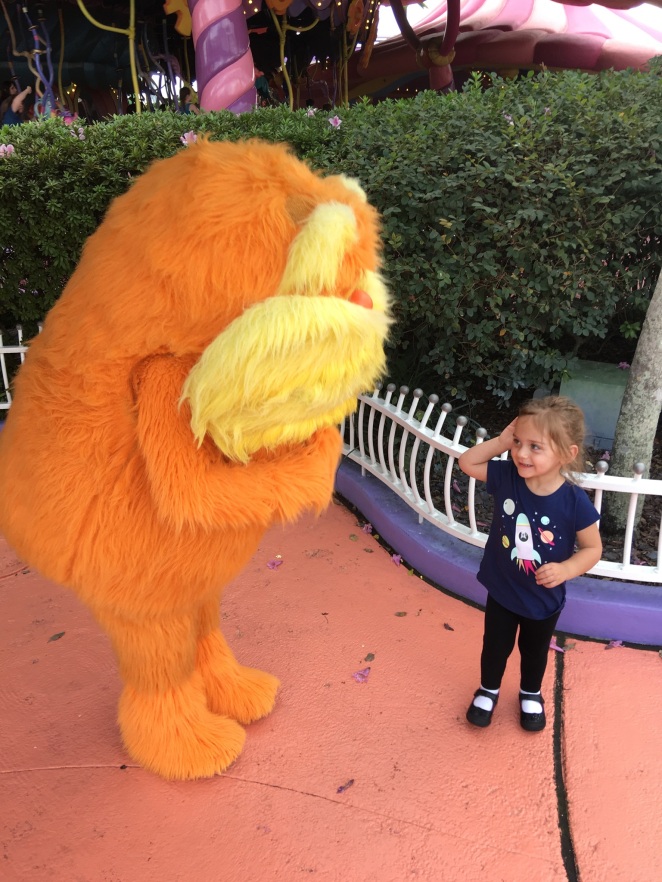 Characters
Oh man, I did not expect this. I mean, I do a ton of meet and greets at Disney World but for some dumb reason I didn’t think she’d care about the characters at Universal. Then, the Lorax walked out. Oh lord. That was probably the most excited I’ve seen a kid for a character in a long time. She me him twice and interacted with him so much. See, there aren’t long lines to meet characters like there are at Disney World. So the worse you’re gonna experience is maybe 10 minutes. The Lorax had hardly any wait and for a while, he was there with no one to greet him. So Melody made sure he wasn’t lonely. She also met Sam I Am, Things 1 and 2 and the Cat in the Hat himself! But, there are not just characters in Dr Seauss land, there were Minions, and Gru and the Girls, and Hogsmead even had the Beauxbaton ladies and Durmstrang men. The list goes on and the opportunities are far more than I expected.

Springfield
The Springfield area is way fun for tiny kids. There are carnival games and huge donuts that they kids can play with (or eat if you are down with them having that much sugar). Her favorite was the Wirl n Hurl ride. She loves these kinds of rides and honestly, the ones at Disney World are quite short so she doesn’t get as much time on them as she’d like. This one lasted a good long while so she really enjoyed herself. Actually, I’d say that was also true of the Caro-Seuss-el. It was much longer than Prince Charming’s Carousel at Magic Kingdom. I understand there is a LOT more rider volume at Disney World on these kinds of rides but it still is nice to have them be longer here.

Hogwarts Castle
We did the tour of Hogwarts Castle, which I have to say was my personal favorite as a massive Harry Potter dork. My daughter actually liked this too, I guess like mother like daughter. She was really taken by the moving portraits on the stairs and wanted to spend a bit of time in there. It’ll be great when she’s old enough to ride it, but she still enjoyed her experience and mommy didn’t get motion sick… win/win I’d say.

Diagon Alley
We had a ton of fun just in the shops and the overall land. Hogsmead is great and they do have the Hogwart’s Express Engine which she liked, but the immersive nature of Diagon Alley just can not be beat. I was floored (yes I cried) and Melody was also super impressed. She instantly found a Hedwig doll and carried that around the whole day. We also got her a wand (ok I got that for her but she loved it) and she had a TON of fun with that thing (see the picture above). The colors and sounds of Diagon Alley were so much fun for her that she was having a blast just playing around there. Finally, the dragon perched on top of Gringots breathes fire and roars. Melody is big on dinosaurs and roaring in general so this was right up her ally.

Honorable Mention: Play areas and Jurassic Park
Believe it or not, we didn’t get to see everything we wanted to see even though we went from opening to close. There are many play areas at Universal for the little ones, from Popeye to Dinosaur themed and all in between which we really wanted to hit up. We also didn’t get to the Dino Instituted at Jurassic Park. It closes early and we just missed it.

Ok, so I’m gonna travel with a toddler, what ticket should I get?
The advice I have for parents of toddlers is much like that of parents with older kids. You can easily get away with a one day, two park ticket. You won’t see everything and you certainly will be tired after touring the whole day. However, if you can swing it in your vacation, a two day, two park ticket is really the best option. Honestly, I could do three or four days here, especially if I wanted to take advantage of rider swap. Still, vacation days are limited and Orlando has a lot to see and do, so if you’re trying to do this as part of a larger Orlando vacation, one or preferably two days, is the way to go I feel. Just don’t forget to get those park to park tickets, otherwise, no Hogwarts Express for you.

So, if you’re thinking of going to Universal with a Toddler, but aren’t sure you should because “Universal is a big kid/adult park”, then think again! We are living proof that toddlers can have as good a time at Universal as they would at any Disney park.